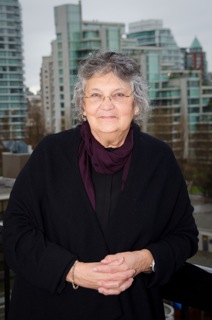 ACCLE is thrilled to confirm that Maria Campbell, writer, playwright and & teacher, will deliver the keynote address at our 2015 Conference, “The Place of Clinical Legal Education”.

Maria Campbell started her career in 1973 when she published her first book, Halfbreed. That book has become a literary classic and continues to be one of the most widely taught texts in Canadian literature. She has also published six other books, the most recent is, Stories of The Road Allowance People.

Maria Campbell’s first professional play, Flight, was the first all-Aboriginal theatre production in Canada. Flight brought modern dance, storytelling, and drama together with traditional Aboriginal practices. She went on to write and direct other plays among them Jessica which  received the Chalmers Award for Best New Canadian play and toured internationally. In 1984, she co-founded a film and video production company with her brother and daughter. With this company, she produced and directed seven documentaries and produced with CTV, Canada’s first weekly Aboriginal television series entitled “My Partners, My People.”

She has received numerous awards, including the National Aboriginal Achievement Award, the Gabriel Dumont Order of Merit, the Saskatchewan Order of Merit. The Chalmers Award for best new play, and a national Dora Mavore Award for playwriting. She has been inducted into the Saskatchewan Theatre Hall of Fame and in 2004 she was awarded the Molson Prize by Canada Council for the Arts. She was made an Officer of the Order of Canada in 2008.

Maria Campbell is retired from the University of Saskatchewan where she taught native studies, creative writing and drama. She is currently the Elder in Residence at the Centre for World Indigenous Knowledge and Research, Athabasca University and the Advising Elder at the College of Law, University of Saskatchewan. She holds four honorary doctorate degrees and has served as writer and playwright in residence at numerous universities, public libraries, and theatres. She has also served as a Stanley Knowles Scholar at the Brandon University and as a Trudeau Mentor for the Trudeau Foundation.

Maria has worked as a volunteer with women and children in crisis for over forty years and is co-founder of a halfway house for women in Edmonton. Maria’s home, until recently, has been a safe house for women and youth.

She is currently a visiting Trudeau Fellow at the University of Ottawa. The intent of Dr. Campbell’s Trudeau Fellowship is to research archival and secondary source material on the roots of violence against Aboriginal women and the triggers that have and continue to escalate that violence.